Dell states that its latest Inspiron Gaming Tower 5676 is a VR-ready gaming desktop. This is the second iteration of the original 5675, which most definitely something new for the tech giant. Dell announced that its Inspiron Gaming Desktop 5676 would feature the same pristine-looking design for its tower, yet this time, swap out the old CPU processor for new, 2nd generation Ryzen chips for excellent capacity The way Dell priced this thing was so amazing, as the starting price is a mere $849.99. My oh my. An Inspiron-made gaming tower, fresh out of the oven with a unique look, easier airflow, with updated AMD processing power, as well as AMD Radeon graphics, is sure sounding like a steal.

I like looking at this Inspiron tower. It is simple, but also bold with its vertical stripe pattern that glows bright blue when it’s running. It reminds me of Alienware, not because this is on the same extravagant realm of style, but because it’s the opposite. It seems that the gaming PC market isn’t just adopting the ‘office friendly’ persona/vibe on laptops. Dell’s Inspiron 5676 is a tower, and it goes along with this new trend as well. It builds upon the last gen, a similarly-priced Inspiron, which features AMD multi-core performance, the Ryzen 5 1400, and AMD Radeon RX graphics, and a 1TB hard drive. 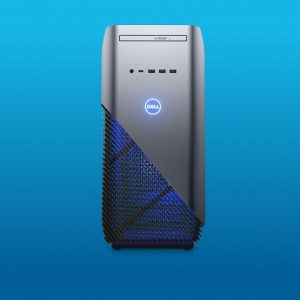 The updated Inspiron Gaming Tower 5676 is a lot like its predecessor, even sporting the same interior LED lighting, and chassis. I don’t think consumers would mind that this didn’t change, as I feel it gives a sense of cooling, openness, and purity. The case itself is standard metal, with a silver plastic as its overcast. That stripe pattern actually wraps around the case, making the multiple sides of the machine look consistently cool, and, in literal terms, it stays well-ventilated. The 30.27-pounder measures a height of 18.07 inches, a width of 8.50 inches, and a depth of 17.23 pounds. Its desktop keyboard recommendation include the Dell KB216, and a Dell MS116 for the mouse (Alienware even offers brand-new peripheral options you can research).

Internals are similar. However, the biggest alteration, is of course, Ryzen’s second-gen chips- a new addition for better performance; and AMD has claimed that these new CPUs have a 15 percent improvement in clock-for-clock ratings. Inside, the base configuration includes the AMD Ryzen 5 1400 chip, but if you want the second-gen power, the higher-end AMD Ryzen 7 2700, and Ryzen 7 2700x (4.3GHz Turbo) are the two consecutive steps up. Graphics are handled with AMD’s Radeon RX 560, RX 570, or the highest, RX 580. Up to 32GB of DDR4-2400 RAM memory may be configured for more intelligent power, and VR-ready graphics. This is more than plenty for high-res gaming. Internal storage capacity includes a 256GB M.2 SSD, plus up to 2TB 7200RPM of dual hard drive space (two 2.5-inch bays, and three 3.5-inch bays in total). Also internally, are up to two PCIe x16 slots for graphics upgrades. Ports included on the back of the 5676 are as follows: 4 USB Type-C 3.1 ports, 2 USB 2.0 ports, audio input/output, Gigabit Ethernet, and HDMI. On the front, there’s an audio combo jack, a slim optical drive, 2 more USB 3.1 ports, plus another two USB 2.0 ports. That’s a total of up to six easily accessible USB 3.1 ports! 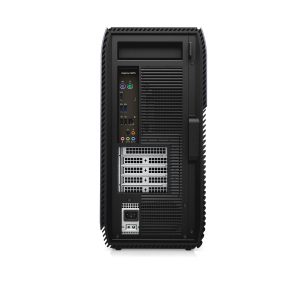 It might be a difficult feat to find a gaming desktop that provides the right intelligence to fit your price point. On the other hand, getting your hands on the most powerful, versatile, and high-handling tower is sometimes an easier feat- as long as you know you’ll be spending a pot of gold on it. AMD’s Ryzen 2000 chips were an easy proposition, as keeping the price down was part of Dell’s intention. Additionally, GPUs have been going down in price, so picking the right one is something Dell thought out well. If you desire next gen processors, the two steps up are priced at $1,149.99 for the Ryzen 7 2700, and $1,299.99 for the Ryzen 7 2700x, respectively. Built for a higher gaming experience, these 2nd-gen Ryzen chips support split-second response rates, along with better multitasking. The new GPUs accommodate for quicker, smoother gameplay, where you, the gamer, should have no problem engaging in, and dominating VR landscapes (it’s also compatible with the Xbox Adaptive Controller), not to mention any other graphic-heavy tasks or games. As mentioned, the Inspiron Gaming Desktop 5676 starts at just $849.99, and became available June 12th. It’s nothing to scoff at, as the base model is beefed up with enough RAM memory and overall potential to fluently run your new favorite game titles.