Lenovo Thinkpad T480s- a Good Performer, but Things Could Be Better

News of a new Lenovo ThinkPad model is usually exciting. This is because the ThinkPad line is one of the best moves Lenovo has ever made. They are well-known for high performance rates, they are durable, and because there are dozens of other big-named laptops out there with more value, or similar value, there is competition. The Lenovo ThinkPad T480s is a new offering from the tech-giant, but will it make its way into the modern world with enough specialty?

ThinkPad T480s is thin, light, and ready to get to work. Packed with 8th generation Intel, Windows 10, and a good battery life, this laptop provides the freedom to work anywhere, all in a desktop-powered experience. Users may configure the T480s, beefing it up as much as possible, which comes with a very high price point. The high-end model of the new ThinkPad is Lenovo’s way to one-up its very own kin, the X1 Carbon, released in its 6th generation in 2018. But can it? 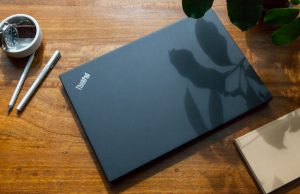 I’ll tell you right now, there are reasons why consumers may love the X1 Carbon more than this new ThinkPad. They may still opt for the X1 after reading this. So let’s figure it out together- is the default 1080p display, and less-responsive keyboard on this Lenovo ThinkPad T480s reason enough to spare itself? Or, could the solid performance, built-in camera cover, and configuration options win the heart over the higher-class Carbon? An important factor when choosing a new laptop is weighing its value, and having an abundance of offerings makes it easier for consumers to meet their match. With the Lenovo ThinkPad T480s, and its starting price of $1,429, you could start with an Intel Core i5 CPU, a 1080p resolution, 8GB of RAM, and a large 256GB PCIe NVMe SSD- which makes for uninterrupted booting times, quick opening of apps, and efficiency when grasping large files. At the top of the tier, there’s a $2,449 configuration, with an Intel Core i7-8650U CPU with vPro, 8GB of RAM, 1TB of SSD, and a more lovely, 2560 x 1440 LCD screen.

The ThinkPad T480s retains its soft black plastic exterior, the same ThinkPad logo, both stamped on the corner of the lid and deck, and features a large enough bezel for its ThinkShutter webcam, which is protective of your identity. Its IPS panel has a native 1920 x 1080 resolution, nothing special, and not up to par with many notebooks these days. This laptop’s display covers just 72.1 percent of the sRGB color gamut, much less than the average of 110 percent- making the display a little too dark, less vivid, and definitely not as impressive of its sibling, the X1 Carbon, which holds a bold 129 percent. Its keyboard allows for 1.6mm of travel, 68 grams of actuation, which is overall above average for laptop keyboards. In the midst of the keys, you'll find the TrackPoint nub, a normalcy for ThinkPads. Along the touchpad, Windows 10 gestures, like Cortana or Action Center are just taps away. As far as touch display properties, although not as responsive as others, it works well for scrolling along a web page, or on-screen input. There is also a fingerprint scanner for logging into Windows 10. That, and the ThinkShutter privacy filter on the webcam, enabled by the flip of a switch, are two powerful tools for enhanced security. 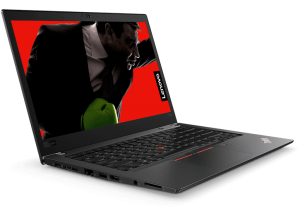 The ThinkPad T480s features a 14-inch display, measures 13 x 8.92 x 0.7 inches, and weighs in at 3 pounds. It is both heavier, and a bit thicker than its Dell Latitude 7390 competitor, as well as its very own X1 Carbon. The thickness only helps Lenovo’s case, as it holds a lot more I/O options- including Lenovo’s USB-C side docking stations. The T480s comes with a USB-C Gen 1 port, 2 USB-A 3.0 ports, a USB-C with Thunderbolt 3 (yay), a full-sized HDMI port, gigabit Ethernet, an SD card reader, and an optional smart card reader, all out of the box. Of course, there is also a 3.5mm combo audio jack, plus 2x2 MU-MIMO Wi-Fi and Bluetooth 4.2. That’s a lot folks, particularly helpful for freeing up space where dongles would usually hang. Business consumers, or anyone on-the-go with their work, would appreciate this.

With the base T840s model, performing via Intel’s Core i5-8250U CPU processor (3.4GHz Turbo), you can expect easy multitasking and handling of countless open tabs, beating the premium laptop average (9,718) performance test, scoring 12,044. This is good news, especially because the T480s only gets stronger and faster. There is even a model with dedicated graphics, a Nvidia GeForce MX150, mixed with Intel’s Core-i7-8550U CPU with 4GHz Turbo, along with 16GB of RAM, and a 512GB SSD, both of which are double the base configuration. This unit may also offer a higher resolution, a WQHD 2560 x 1440 display. Even at its most basic specs, the T480s is an overall good performer, yet with that Core i7 upgrade, increased efficiency and handling of demanding tasks are the laptop’s most beneficial attributes. Putting it into perspective, the X1 Carbon may be a hard act to follow, but Lenovo’s new ThinkPad model is on par with both the Dell XPS 13, as well as Huawei’s Matebook X Pro, in terms of benchmark performance tests.

Lenovo lets you rummage its website for your own price-point, with various models incorporating both Core i5 and Core i7 chips, a discrete GPU, display options with touch, and customizable RAM memory and storage ranges. Self-customization can be the perfect opportunity for someone who is seeking a work laptop. Other times, it’s helpful to have something picked out for you. As far as answering the question of whether the T480s beats the X1 Carbon in any way, we do know the T480 holds a battery life of just under 9 hours, which is actually better than the popular X1 Carbon in web browsing tests. However, the T480s is not as thin and light as the X1 Carbon, nor does it beat it in CPU performance tests.

Although the ThinkPad may not stand out visually, it’s still a classic. It’s larger and heavier than its crowd of competition, but remember it holds a plethora of I/O ports, and tangled cables won’t be a problem. The facts prove that this new ThinkPad T480s isn’t quite specialized. It doesn’t stand out as much as it could, and some say “if you want a ThinkPad, get the X1 Carbon instead”. The X1 Carbon has a similar price point, and allows for upgraded configurations as well, including a faster Core i7 chip, and a WQHD display with Dolby Vision. When considering value, think of the option of having the more powerful, thinner X1 Carbon, or even the smaller-sized Dell XPS 13, for equal or even less money. The final verdict- there are other Lenovo ThinkPads out there, easy enough to find as it was to add an “s” to the T480. And if you find them, compare for yourself. Is Lenovo is being generous, competitive, or innovative at all? Yes, but for a pricey ThinkPad with strong performance, there may not be enough of a “better” experience to swerve customers.