Big Changes For the Samsung Chromebook Plus V2, Upgraded Processor, Steal of A Price

We will always know what the Chromebook can offer- a cheap, alternative laptop that takes on the Chrome OS for its complete functionality. Chromebooks across the board have entered into the classroom niche, easily, as schools are able to afford them. They provide students with the experience of using a device that will soon be a long-term tool. However, not all Chromebooks are created equal. Although they all utilize Chrome and are simplified, online-only computers, we could say the same thing about all Windows-operated devices-not all created equal. For example, take the Chromebook Pixelbook, which is a high-performance model, with and a beauty of a display, and a price range much higher than most of its kind, starting at a grand. Then there’s a Dell model, the Chromebook 7310, an 11-inch 2-in-1, starting at just $500. However, one of the most spoken about Chromebooks lately, the Samsung 2-in-1 Chromebook Plus, has received some new upgrades since its 2017 debut. One of the biggest difference consumers are going to care about, as well as its biggest change, is from an ARM-based chip to an Intel one, and this is due to Samsung pushing and pulling all the right strings.

The original Chromebook Plus, “2017’s best overall Chromebook”, was designed for multiple uses. It worked as a tablet, used a stylus, held a well-equipped desktop-like browser, and even a great keyboard, all important features for a 2-in-1. This was also the beginning of Chromebook’s OS adopting Android apps, which, with its web browser and web apps, was a solution for more functionality, and creating more competition. Fully-loaded, and more functional than the herd of other Chromebooks, the world is now informed of the second-gen Chromebook Plus V2. It’s display size, style, and productive tools are still the same, and its design continues on with the employment of alternating between laptop and tablet modes, as needed. 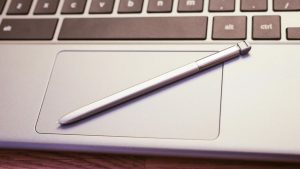 The new Chromebook Plus V2 has a spin on it. It’s a turbocharged version of itself, with an Intel Celeron chip. This is no Core i-Series update, but the new Celeron 3965Y is dual-core, 1.5GHz chip, with a better performance punch than last year’s hexa-core ARM component. With Intel inside, Chromebooks are on the up-and-up. Although chips, such as Celeron, may not be conversely “better” than ARM in every scenario, in the case of the V2, it works. ARM chips for Chromebooks are powerful “enough”, yet the preface of upgrading to this Kaby lake-based dual-core 14nm chip now means the V2 may operate at 1.5GHz with a TDP of 6W, supports 16GB of DDR4 RAM memory, and its accompanied Intel HD 615 Graphics, resulting in a better handling of tasks. This processor may not be as heavy duty as an Intel Core i-Series chip, yet it accounts for faster performance, which is the point of an upgrade from ARM to Intel. Storage and RAM memory remain the same, at 32GB and 4GB, respectively.

As far as the body of the Chromebook Plus V2, the only thing that has changed is its dimensions. At 11.3 x 8.2 x 0.6 inches, and an aspect ratio of 16:10 (the previous being 3:2), this is a more conventional display overall; standard, and fitting. The 12.2-inch 1920 x 1080 LCD screen is excellent. It’s touchscreen, with a pressure-sensitive stylus for drawing or note taking, etc., makes for multiple tools of input. Although technically a downgrade from the 2400 x 1600p display found on the Chromebook Plus, the V2 still remains impressive. Chromebooks work well and look great with their own “best” resolution, and for this particular Chromebook, this is a staunch choice for its 12.2-inch screen size, and for software scaling. Embodied with the same aluminum-alloy chassis as before, the design is has a pure, minimalist, and sleek vibe. This means the Chromebook Plus V2 is very lightweight, at only 2.93 pounds, and during tablet or laptop mode, this makes for very easy handling. 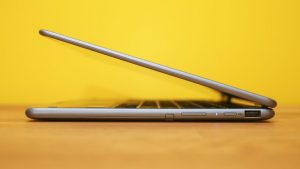 Backlit keyboard lighting and an upgrade in storage -both are important upgrades, and also two features not seen on the Chromebook Plus V2, even though they should’ve been. Ports are something that have been upgraded on the 2-in-1 V2, everything you’d need in fact. This includes a MicroSD card reader for extra storage, a solution if not happy with the amount included. It has a pair of USB-C ports, which make room for optional 4K display output using an adapter, a microSD card slot, a USB Type-A 3.0 port for user’s own estate in hardware, a 3.5 combo headphone/mic jack, Pen dock, power button, and volume switch. The Pen dock, carrying the same stylus as the Chromebook Plus, needed no upgrade, as 4.096 levels of pressure sensitivity is great.

Still, this is considerably just as good of a laptop as the Chromebook Plus of 2017, as it’s built upon basic standards, right where it needs to be for ample lighting, easily interchangeable modes, as well as a well-suited, conventional display. The Plus V2’s updated display, although a lower resolution count, works alongside the corresponding CPU processor well. Although it may not be sharp as it could be, the fewer pixels the machine has to shift makes for fast processing power. So, let me pose a question- is the title of “Best Chromebook of the year” still belong to the Samsung Chromebook Plus in 2018? Does it tie in with the new Plus V2? The Chromebook Plus V2 is certainly an full packaged deal, and its price starting at just $499 only helps its cause to beat the last iteration. Certainly, it’s highlights are clear- there’s still a nice, solid build, which remains lightweight and comfy. It has bright display, and yes, there’s definite progress on performance ratings thanks to that CPU upgrade. The Plus V2 also kept that 39WH battery, which runs a good 8 hours on a full charge. It appears that Samsung kept the features that made it “the best”, and merely changed what could make it run better. Although we may have hoped for a backlit keyboard, or more storage, the bottom line is, this is going to be the best bet when choosing a Chromebook. With a balance between good pricing, and continued ability to bridge the gap between tablet and laptop, its best specs are in the right place. This could be one of 2018’s best.

One Response to Big Changes For the Samsung Chromebook Plus V2, Upgraded Processor, Steal of A Price