In attempt to both refresh its Android line of tablets, and to rise in a declining market, Lenovo has a new slew of updated Tab-series devices. It isn’t quite surprising, you know, about what’s happening lately. There has been a definite trend in consumers opting for the sleek, ultra-thin, and ultraportable laptops, over tablets. Can we help it? These laptops are being offered in every direction, and whether it’s a lasting trend or not, tablet market earnings have been falling constantly, with 13.5 percent this recent second quarter.

We know it’s not on behalf of manufacturers unwillingness. In fact, huge names, like the high-ruler Samsung, just put out its Galaxy Tab S4. That being said, Lenovo decided to release not one, but five new Android tablets, all affordable, and ready for the home environment. Great for children, parents, and workers, tablets of every niche have been attempted by Lenovo. Grouped into three series, all five tablets aim to please the budget-minded consumer, the homebodies, and the ‘To-Do List’ lovers. The various tablets have some helpful and recreational features, like the optional Kids Pack, which is basically a shock-resistant, screen protecting hero, and the Productivity Pack, a matching case and Bluetooth keyboard. 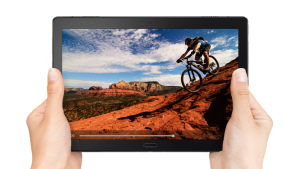 The last two, the Lenovo M10 and P10, both with 10.1-inch displays, are the higher-notch tablets, featuring extra goodies and power that stand apart from the E-series. Both the Lenovo Tab M10 and P10 have a 1920 x 1080p display, run Android Oreo (regular), and have an octa-core Qualcomm Snapdragon 450 CPU, at 1.8GHz. The Lenovo Tab M10 comes with 3GB of RAM memory, and 32GB of storage, and two speakers. As the fairest of them all, the Lenovo Tab P10 comes with 4GB of RAM, 32GB of storage, four speakers, both front and rear-facing webcams, and features a fingerprint sensor. 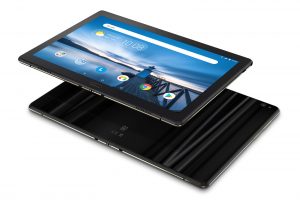 Pricing is only available for the Lenovo Tab E7, at $70, the Tab E8, at $100, and the Tab E10, at $130. All will be available in October 2018, exclusively sold at Walmart. As far as the Lenovo Tab M10 and P10, there has yet to be any information regarding price, however pre-orders through Amazon are expected to start in the coming winter months. Because the M10 and P10 are more in line with what is an updated tablet today, both provide FHD displays, better CPUs, as well as higher RAM memory and storage. We can expect these to be priced a bit above the Tab E10’s $130 price-point, perhaps in the $145 to $160 range. In deciding to to release these five tablets, (mostly) running Android Oreo, and priced smartly, Lenovo hopes to bring updated features and functions to home devices you can count on. The tablet market may not suddenly skyrocket when manufacturers are competing against the ultra-thin laptop trend, but Lenovo took a shot. Designed as family devices, for simple entertainment or light gaming, the slew of tablets could still be a nice gift this holiday season for teenagers, who are not already settled on the iPad, or stay-at-home mothers who enjoy an accompaniment to their smartphone to manage their tasks for the day.