Asus’s TUF FX504 Is an Entry-Level Gaming Laptop with a Durable Keyboard, Too Many Compromises?

The Asus TUF FX504 wanted to make an important update to a general gaming laptop problem. See, real gamers, yes that means even entry-level, enjoy a nice display. Also, RAM needs to be pretty mainstream, and so does it’s graphics card. A good performance level across the board means a lot for a gamer, so it may be as immersive of an experience as possible. Besides visual context, there is another vital part of enjoying a game- the way your fingers feel across the keys. Consider how intense gaming can be, and that intensity is often put on the keys. So, some sort of “meh” keyboard isn’t going to cut it. Luckily, for those shopping for a gaming laptop that will check that box, the Asus TUF FX504 has it covered.

As much as I dramatized the importance of a keyboard’s endurance, studying the $699 FX504 involves many factors. To start, there’s the vital essence of a nice display, which, in this case, Asus failed to make one of its strong points. The base model features a 15.6-inch 1920 x 1080 LCD screen, rather than an IPS-type panel, one used by Dell and Acer in their similarly-specced models, the Dell Inspiron 15 7547 and the Acer Nitro 5. It’s chassis definitely suits the part of an eccentric, traditional gaming laptop, so it got that down. However, it’s sad to say it’s display is so subpar, it deflates with its muted, washed out colors, poor off-angle viewing, and limited contrast.

It does offer some good graphics for performing old and new games at medium settings. The Asus TUF FX504 features an Nvidia GeForce GTX 1060 GPU, along with full Microsoft DirectX 12 support, plus 8GB of DDR4 RAM. This is more than enough graphics power to filter out the possibilities of dreaded lag, and it certainly makes this laptop a multitasker, one that is able to play the latest in popular PC gaming. It also comes with an 8th Generation Intel Core i-8750H CPU processor, with boost turbo of 4.1GHz. Interestingly, Asus chose a SSHD, or Solid State Hybrid Drive for this model, running a 1TB 5,400rpm hard drive matched along with 8GB cache memory. This is fast, but there’s also an SSD for the boot drive, and the option of adding an M.2 SSD. Warning: if your games aren’t running up to par, this might make you feel like you need to crack open the bottom to add more memory or storage. Another memento folks, there is no USB-C ports or SD card reader on this laptop, so that may cause some concern. 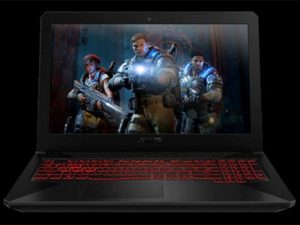 So yes, there are similar, better entry-level options for this particular recipe of laptop. The display is a big downpoint, and it’s too bad that Asus compromised that credible feature. Now, if you plan on connecting better screens or alternative peripherals, you have no worries here. Remember, the low-end price of $699 does not include a great display, but for the $1,000 model, you can have IPS panels (hint- that’s not a fair upgrade price). However, for a new purchase consumer, this disappointment may drive you elsewhere. The laptop’s memory and storage can be configured for good gaming performance at low to medium level, but with Asus’s lack of reserve storage and memory, gamers may notice some suppression at times.

Other qualities on the Asus TUF FX504 are not disappointments. There’s a comfortable and extra hearty keyboard that won’t tire you out, as Asus claims it can last for up to 20 million key presses. So yeah, it’s a treat to have a keyboard like this. Other entry-level gaming laptops don’t usually improve this area to more than the extent of key pressure and travelling. Also, because the TUF FX504 has a thinner physique than some, it’s a nice surprise to find its cooling system improved to remove dust and dirt. These also provide the user with quick capability of controlling cooling fan speed during the insane heat of battle. Ending verdict, the durability of the keyboard is a strong recipe point for making a great gaming laptop. Still, a couple other points are shy of exemplary, like the lackluster display. Also, the pricing, which from $699 to $999, wouldn’t be a simple choice for someone wanting true entry-level gaming. Put simply, it’s not quite a bargain.