The 15-Inch Precision 3530 Is a High Performer, Entry-Level Price-Point

Described as durable, secure, speedy, and able to sustain a long battery life, the Dell Precision 3530 is a “One Punch Man” of workstations. With a starting price at $949, this laptop features the options of Xeon CPU power, Nvidia Quadro graphics, and a subtle design. Sporting a 15-inch display, Dell incorporated checked off enough boxes to make this machine a powerhouse. Users will be happy with its intense power, security, durability, as well as its comprehensive stamina.

The 3530 has come right in time for a nice refresh. As the fourth generation of the Dell’s Precision mobile workstations, over a year has passed by since Dell made an update. The last line included excellent Linux-powered machines, the Precision 5720 desktop in particular. As a developer and engineer-geared desktop, the 3530 model is powered with Core i-series or Xeon E-series CPU processors for some seriously hard work. This “One Punch” workstation can be also configured with high amounts of RAM memory and storage, and with the best graphics, tips the pricing scale to nearly $3,000. So, yes, this may be an affordable option, but it can also be crowned to its full potential- a blazing-fast powerhouse, all with a “Hulk Smash” external design. Just don’t smash it. Or do. Either way, it would be difficult for this one to up-and-break on you. 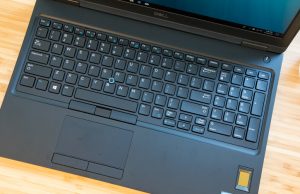 Utterly Dell-like in appearance, the Precision 3530 sits formal in its black exterior and metallic structure, yet has no added appeal to it to make it stand out. The whole package may seem bland, sometimes signature to a get-to-the-point work machine. Weighing a hefty 5.1 pounds, and measuring 14.8 x 9.9 x 0.96 inches, this model is the heaviest machine in its range. It features a 15.6-inch HD 1366 x 768p Anti-Glare Non-Touch LCD display, with the optional upgrade to FHD. For being on the lower mark, this is a decent display, but nothing to beat competitors, unfortunately. Additionally, the 3530 covers 117 percent of the sRGB color gamut, which is plenty, but not enough to match workstation averages, which tends to be around the 148 percent range. The display might be a downer, but nothing else is. So, let’s continue.

As stated, this is a heavier machine, yet it is currently a lighter, thinner version of itself- and as far as fitting its hardware credentials, Dell made no sacrifices. Built with Intel’s latest 8th Gen Core i-Series, options include multiple Core i5-8000H or Core i7-8000H series chips, or the 6-core Xeon E-2176M. For graphics cards, the choices are either the integrated Intel UHD 630 GPU, or the Nvidia Quadro P600 with 4GB GDDR5. As far as software, Ubuntu Linux 16.04 is one offering, while Windows 10 Pro iterations are also available for about 100 bucks or so. As the bulky tank that it may be, it not only passes MIL-STD-810G standards for durability, but holds security to high standards.The Precision 3530 has the optional FIPS fingerprint reader, a smart card reader, an NFC reader built internally, Windows Hello, and Intel vPro for remote computing- all for the utmost security possible. Other ports include an optional SIM card slot, 3 USB 3.1 ports, VGA, Power Adapter, headphone/microphone jack, HDMI 2.0, USB-C with optional Thunderbolt, as well as Ethernet LAN, Wi-Fi, and Bluetooth for connectivity.

The base for RAM memory is 4GB, expandable up to 32GB. Storage includes a 2.5-inch 500GB SATA hard drive to start, up to a 2TB SATA hard drive, an M.2 256GB SATA class SSD, and even the option of a second, add-on hard drive. Scoring very well on the Geekbench CPU overall performance test, a whopping 19,809, while the average tilts towards the 14,800’s, Dell did well for this Precision workstation, and yes, it’s considerably powerful. Its Nvidia Quadro GPU operated high on the 3DMark Ice Storm Unlimited graphics benchmark, rising well above the category average (139,564), at 153,074. Finally, the Precision 3530 handles tasks incredibly fast when working with multimedia transfering, coping 4.97GB of the files in just 6 seconds, or a 848 megabytes per second. It also contains a 68WHr battery, for enhanced staying power up to 8-9 hours.

If desiring an all-day, and then some, blazing-fast workstation, the Dell Inspiron 3530 is there for you. It ranks above competitors in nearly all ranges of testing, and comes with Precision’s Dell-branded Precision Optimizer, for prioritizing your tasks based on how hard the CPU, GPU, RAM memory, and storage are being utilized. Plenty of software is available, consistent with Dell’s usual applications for driver updates, such as SupportAssist, Power Manager for customizing the manner in which your battery is being resourced, and Mobile Connect, for texting or making phone calls right on your laptop. Basically, this machine works like a tank to accomplish your working goals, while at the same time maintaining comfort in its keyboard for smooth control. It is most definitely a prime choice for the creative type, the powerful engineer, or any individual who seeks consistent power and graphical performance across the board.