Dell G7 15 7588, that’s the name of the last G-series gaming laptop in the bunch. Let’s see what we’re expecting. A heavier unit? What about higher-end graphics, or higher-end graphics and a bigger hard drive? We know it will be resilient to its G3, and G5 kin, and it’s bound to carry some higher qualities that make it stand out the most, as all models thus far have had improved options for 2x2 Wi-Fi, LCD screen quality, and Thunderbolt 3.

Starting at just 50 bucks more than the G5 15 5578, at $799.99, the 15-inch G7 7588 starts at $849.99, and features a FHD IPS Anti-Glare LED backlit display (more stunning quality is via the 4K Ultra HD option). Like all G-Series laptops, this is also non-touch, and features anti-glare for a wider range of viewing angles, very important for gaming. However, with its 8th Gen Intel, massive storage, and a GPU that provides vivid graphic happiness, the G7 takes its visual experience up a notch via Nvidia GeForce Max-Q. Still considered entry-level, the outside of this device is, well, stunning. It stands out, obviously different from the rest of the G-Series pack, having more elegance, and a truly wicked-looking cooling system. The system weighs 5.82 lbs, barely heavier than the 5.76 lb G15, and features blue backlit color both on the keyboard and trackpad. About those massive vents in the back- Dell aerodynamically designed them for better air flow, with dual-fan cooling. The G7 15 comes in either black or white, with the company logo glowing in blue on the lid and front of the screen. 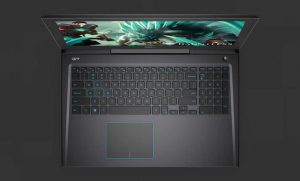 You’ll find top-end hardware on this one, and will be able to configure it with a couple different options for RAM and hard drive space. For CPUs, there is an 8th Gen Intel Core i5-8300H CPU processor, reminiscent of the other models, but can be upgraded to the Core i7-8750H (up to 4.1Ghz), also available on the G5 15. For graphics, the lowest configuration is Nvidia’s GeForce GTX 1050 along with 4GB GDDR5 graphics memory. Dell also stuck with the same GeForce 1050 Ti with 4GB DDR5 graphics memory as a step up. However, the highest available video card, the GeForce GTX 1060 with Nvidia Max-Q Design technology, with 6GB GDDR5 of dedicated video memory, is exclusive to the G7 15. 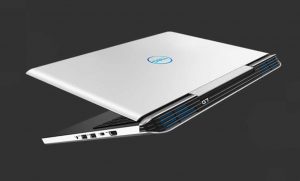 Dell’s investment in gaming is right on the line, and it’s perfectly-timed, because things are getting surreal in the gaming rig market. The manufacturer has actually commissioned a study regarding the preferences of gamers, in addition to their behaviors and attitudes, to get more facts. I think it’s also clear the company will be keepin-on, progressing with more laptop and tower releases, with direct intent to gain over competition. The truth is, most people who game on a laptop/notebook have something flashy and, even sometimes, hyper decked-out. But recent alterations in design and exterior make for more happy consumers, particularly the more-discreet, and the professional. It could be said that Dell grew an opportunity to offer more families of gaming laptops, all by moving its work and worth away from its Inspiron gaming line, to the G- Series.

The distinction between the other members of the G-Series fam and this G7 15 are pretty simple. Expect a more versatile look, with laptop color options not just being matte black, but now either a licorice black, or white. Those dual-fan cooling vents are an eye-catcher for sure, and its Max-Q graphics upgrade will allow all players to savor the lovely visuals. The entire gang of budget-friendly gaming relatives come in all-sizes, are all set with IPS displays; and at the core of them, is a legit foundation for power, especially if you spend the incremental cost of the higher-end models. Seekers should get ahold of these. They’re Dell. They will perform up to high standards, and nobody can complain that the internal hardware inside is a steal for the price.