Paperless We Are Not 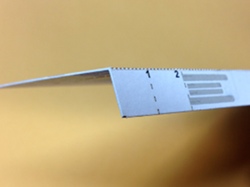 Decades ago a popular buzz-term was the "paperless office". It was widely believed that accelerated adoption of computers and other digital means of content production, copying, and distribution would reduce office related paper consumption. That never happened, and paper consumption has continued to climb. That may be related to the fact that computers enabled the creation of vast increases in content of all types, so that even with a reduced percentage of that content being printed on paper, the total amount that is printed has continued to rise.

It may seem paradoxical that increased use of a new paper-based product could substantially reduce the growth rate of paper consumption, but that does seem to be the case. A start-up company called intelliPaper® is producing a product line by the same name.
Tweet This Phrase 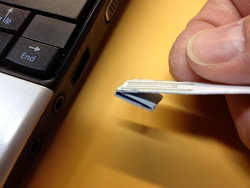 All of the intelliPaper products have electronic components embedded into paper with the added capability of containing not only printed data, but also digital data which can be displayed or copied onto any computer via a standard USB port through small electrical contacts that are on the surface of the paper. That paper is basically the same thickness as card-stock, which is about half of a millimeter (0.5mm) thick. The result is an ultra-thin-and-light USB flash (thumb) drive which can be embedded in trade-show handouts, business reply cards, magazine inserts, advertising mailers, event tickets, DataNotes™, perforated sheets, and of course, business cards.

The flash drive component is accessed by simply removing and folding a small perforated portion of the paper to increase its thickness before inserting it into a USB port. For now, data sizes of 8 to 32 MB (megabytes) are planned. The intelliPaper flash drives are definitely not immortal, and are intended for a limited number of uses before disposal.

Low cost, and physical portability by mail, or hand-delivery as business cards and trade-show handouts could make intelliPaper USB flash drives, in many shapes and sizes, both ubiquitous and as indispensable as the common sticky note. DataNotes for example, are approximately 3 x 3-inches in size and are reminiscent of Post-it sticky notes, but with a coolness-factor that goes off the charts with the embedded USB flash drive.
Tweet This Phrase 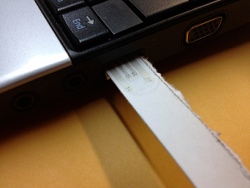 The intelliPaper innovation is definitely not a gadget any more than paperclips, or sticky notes would be considered gadgets. It could easily become as much a staple in office supplies as, uhmmm, staplers.

This journalist contacted a spokesperson for the intelliPaper company by phone and found that recent planning indicates they expect there will be at least 10 DataNotes in a package costing less than $20. The spokesperson told Parts-People.com that the DataNotes product is anticipated for release by the middle of this year.

The product called intelliPaper sheets will be available in commonly useful configurations and typically will be perforated. One example is sheets of business cards, with 8 USB flash drive business cards on a sheet which is consumer printable on ordinary printers.

A very light version of their reader / programmer will be packaged with intelliPaper sheets so consumers can load their own data onto the USB drives.

Those products are not your father's USB drive. In addition to USB capability the disposable thumb drives feature NFC (Near Field Communication) and can be used wirelessly with all NFC-enabled devices such as smartphones and tablets.

The "green" environmental feature of these products is simple and straight-forward. They are made of paper containing a small piece of silicon, and are far more environmentally friendly than other USB devices which have metal and plastic components. As a reminder: silicon is a primary constituent of ordinary sand.

Another reason that intelliPaper is an environmentally sound product is that like other far more expensive and less portable USB drives, an intelliPaper trade-show handout, business card, or mailer can easily replace dozens or even thousands of pieces of paper.