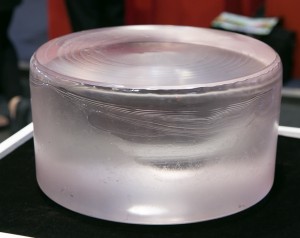 GT Advanced Technologies is a company that makes industrial furnaces that operate at about 4,000 degrees Fahrenheit. That may seem like a bit of arcane trivia but it probably will have quite an impact on vastly improved upcoming smartphone display screens; or to be more precise, an impact on impact-resistance. GT Advanced makes the equipment necessary to manufacture synthetically made cylinders of sapphire called "boules" which weigh 254-pounds and can be made into smartphone display screen covers, military windshields, instrument windows for satellites and spacecraft, and even watch crystals, camera lenses, and LED substrates. Those cylindrical boules of sapphire are made from an abundant naturally occurring substance called corundum.
Tweet This Phrase
Sapphire is just about perfect for smartphone display screens because it is 2.5 times stronger and far more scratch-resistant than chemically strengthened "floated alumino-silicate glass" products such as Corning Gorilla Glass and Schott Glass Xensation. More importantly, sapphire is second only to diamond in hardness and scratch-resistance. Diamond rates 10 on the Mohs Hardness Scale, with sapphire rating 9, and Gorilla Glass coming in at about 7 to 7.5 on that scale. Display screen covers made from sapphire are also more optically pure than glass.

Appearing at Mobile World Congress (MWC) a spokesman for GT Advanced Technologies provided demonstrations in which participants were invited to use a rock fragment to scratch samples of both Corning Gorilla Glass and sapphire display screen covers. Predictably the Gorilla Glass was substantially scratched with moderately vigorous abrasion, while the sapphire was completely unscathed even after very vigorous and extended abrasion and some hard thumps from the rock.

The reason the sapphire covers can survive hard blows from solid objects is because of their scratch-resistance. Various forms of glass are actually held together by surface-tension. Scoring or scratching the surface interrupts that surface-tension and creates a fault that will then allow even a moderate bump to shatter the glass.

Sapphire smartphone display screens are actually going to be more important to most end-user consumers than it may first appear, because at least one study indicated that 23-percent of iPhone users (for example) are using phones that currently have broken screens, and on average have used and tolerated those broken screens for six months. That's an amazing number when one considers that higher priced smartphones probably get the benefit of protective shells more frequently than lower priced models. That 23-percent number screams even more loudly when considering the fact that it does not include an additional percentage of phones that were destroyed and taken out of service when the screen was broken. That kind of breakage rate is a problem screaming for a solution, and sapphire is probably going to be the next workable answer.

Manufacturers are said to typically pay $5 to $6 for Gorilla Glass screen covers. Initially OEMs (Original Equipment Manufacturers) will probably have to pay $15 to $20 for sapphire display screen covers. Smartphone end-users that are knowledgeable about the high damage rates will probably be quite willing to pay $15 more to protect expensive smartphones. If enough consumers demand sapphire screens, the cost will plummet within a year as OEMs turn to vendors that have purchased the GT Advanced furnaces and can supply sapphire display screen covers in quantities that produce economies-of-scale.

Corundum is No Conundrum

Sapphires and rubies are both forms of corundum, and therefore are essentially the same thing except for names that refer to color. Corundum is a crystalline form of aluminum-oxide with trace amounts of titanium, chromium, and iron. It is a naturally clear, transparent material, but does exhibit various colors when impurities are present. Gem-quality red corundum is typically referred to as ruby, while most other colors and clear specimens are called sapphire.

This journalist has, for sixteen years, owned a watch with a sapphire crystal face. As of this writing not a single scratch is visible on that crystal when using a 2x magnifying glass.