Not for the faint-hearted, but fervently sought after by fascinated enthusiasts, the credit card sized Raspberry Pi Linux-based computer has managed to generate a dedicated community of adherents that seem to live and breathe every detail of its development. If you are one of the enthusiasts you already know its specs inside and out. If you are not one of those adherents, you may be more interested in other facets of the Raspberry Pi which has already garnered world-wide attention with ramifications for schools and universities, and also with its potential for just about every type of business and industry.

As a description for the uninitiated, Liliputing.com called it: "pretty much a low power motherboard, memory, and processor". Actually it's a bit more than that, but not much. It is, however, precisely what it is intended to be by the non-profit Raspberry Pi Foundation. Their own website describes it as having the graphics capabilities approximately equivalent to a first generation Xbox, and overall real world performance akin to a 300MHz Pentium 2, but with far superior graphics.

Priced at $35, that's a superb value. Think back for a moment to what the first generation Xbox was priced at, and what you had to pay to get any device with a 300MHz Pentium 2 inside when those were first released. Then go to a web-based inflation calculator and determine how much that equates to in today's dollars. Keep in mind, those inflation calculators use government supplied information, which many experts say very significantly understates inflation. The fact that the Raspberry Pi can supply that much computing power for $35 is truly impressive when compared to other devices on a cost versus functionality basis.

Eben Upton, the founder, became concerned about falling skill levels in newly admitted students as he was working in admissions and lecturing at Cambridge University. Students had very little knowledge of basic computer systems architecture or systems development, even though they typically had the ability to create documents.

The foundation is committed to supplying devices with the purpose of inspiring students to embark on technology careers by promoting the study of computer science and related topics. Work is being conducted with the open source community and various other partners to facilitate development of software related materials, including a user guide, a programming manual, and even a few books and video tutorials that can be used in additional subjects beyond computer science. One of those partners is the "Computing at School" (CAS) organization which plans to promote the teaching of computer science. CAS has formal support from various industry partners. Because the Pi can be made to operate as a basic desktop computer, institutions including businesses, schools, and universities can deploy entire fleets of desktops for a small fraction of the price of traditional PCs.
Tweet This Phrase
Clearly, the Raspberry Pi Foundation is fulfilling its mission, and the Pi itself is capable of carrying out its above stated purpose. Priced at $35 for the upgraded model B, and $25 for the basic model A, the Pi appears to be the ideal design, at the lowest possible cost that provides that "basic level of functionality". It's so basic that the power-switch is simply the power-cord: just plug or unplug to turn the Pi on or off.

Usage scenarios are widespread and truly huge numbers of Pi units could be sold. Even before its release in substantial quantities, the Raspberry Pi was already turning into a bigger success story than Upton may have expected. The foundation has received indications of interest from developing countries, museums, and hospitals for a variety of uses, including powering displays, and also for parents to use for monitoring disabled children and providing accessibility applications.

They're Mod About Pi 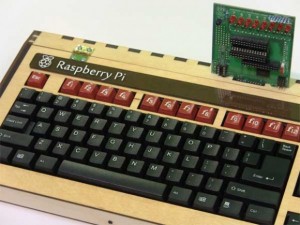 The Pi has been warmly embraced by the modding community and is being used in projects such as robots and drones. One inventive tinkerer has used a Raspberry Pi to make a miniature Super Nintendo console by making his own controller adapter. Another example is a home media center using the Raspbmc distribution for XBMC, but because of licensing restrictions MPEG-2 videos cannot currently be played on a Raspberry Pi.

One modder constructed a keyboard powered by a Pi, with a wood body that looks like a wooden Commodore 64. As another example, an enterprising engineer has modified the Vuzix 1200 Star heads-up glasses with a Pi, in an obvious knock-off of Google's Project Glass.

Until recently availability has been limited. The manufacturers, Premier Farnell / Element 14, and RS Components are ramping-up volume production, and are now making about 4,000 units per day. Both manufacturers have world-wide distribution and quantity limitations on orders have been removed.

Premier Farnell / Element 14 has chosen EML Wildfire as their public relations agency to produce a global campaign with the purpose of taking Premier's media outreach to the next level, while increasing visibility of the Raspberry Pi brand and promoting awareness of its element14 design engineering community.

All Aboard the Goal Train

Google is giving the Raspberry Pi Foundation's educational goals both benefits and a boost. Google's Executive Chairman, Eric Schmidt, said Google will buy Raspberry Pi units for British schoolchildren, and has written a check aimed at getting computer scientists to reintroduce engineering principles to students.

Fedora Project, the producer of a Linux-based operating system, has initiated its "Summer of Hardware" event by contributing 150 Raspberry Pi units to be given to qualified Fedora Project participants.

The Raspberry Pi Foundation itself has launched its "Summer Programming Contest" for youthful coders by offering a grand prize of $1,000 and five checks of $200 each to runners-up, in return for writing programs that win the approval of judges.

In Case You're Wondering 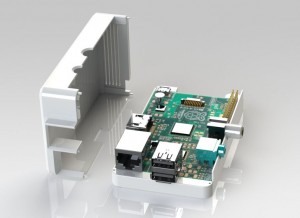 Everyone should know by now that several entities have entered, or will enter the business of making Raspberry Pi cases. In pursuit of its goals of spurring entrepreneurship, the Pi Foundation' has decided to let others make the cases, but will supply very basic cases with Pi units to educational institutions.

The foundation does, however, recommend the Pibow case for now. The Pibow case is a modular, acrylic kit that users can assemble for themselves, and is designed to allow the addition of components such as a VESA mount or camera, or other accessories.

Another available case is the Bud Pi Sandwich which also facilitates future upgrades or expansion. It's rather basic, but has the advantage of being able to hold two Raspberry Pi units in its enclosure.

At launch ArchLinux, Debian, and a special version of Fedora software distributions are supported, with Debian as the recommended default distro. A specifically optimized version of Debian called Raspbian is under development, and Android 4.0 - Ice Cream Sandwich (ICS) is being added to that group, but is still in development as of early August, 2012. The ICS version does support hardware-accelerated graphics and video playback, but currently lacks support for the AudioFlinger Android sound system.

The foundation has made Python the officially supported programming language.

Hexxeh, the Chromium OS developer, is experimenting with a beta version of the Chromium browser made to run on Raspbian, but so far it is not the full Chromium OS which is still under development. In its current form it may be more than the Pi hardware can handle well.

Is that a Gleam or Just a Spec in Your Eye?

Model A or Model B? Those are not black Ford automobiles from the early 1900s. Both models of the Raspberry Pi now have 256MB of Ram as of early August, 2012. Both use a Broadcom SOC (System on a Chip) containing a 700 MHz ARM11, coupled with a Videocore 4 GPU capable of BluRay quality playback.

A 5-megapixel camera-board module is under development and may cost $20 to $25 when it becomes available later in 2012.

In a word: No. There is no need to batten down the hatches for DEFCON 1, because Intel's Next Unit of Computing (NUC) is at the other end of the spectrum from the Pi in both components and cost, and aimed at users with a real need for considerably more power and capability.

The NUC incorporates Intel's Ivy Bridge Corei3 and i5 CPUs into its ultra-compact form-factor, so it really is in a completely different class, as is the CompuLab Intense PC, and as a result is certainly not pursuing the same users. Intel's senior product marketing engineer, Fred Birang, said the NUC is aimed at kiosks and digital signage, which certainly does enter into the usage territory of the PI, but has no chance of competing on price if a Raspberry Pi will do the job.